I am working on creating a simple FX template for our hazer to turn on and off periodically within an FX. I can use any of the Wave FX shapes except for the Square option. When I do this, nothing changes with the fixture.

I’m definitely open to a better way to achieve this effect with the hazer! But this is all integrated and tested with the sine shape, but the hazer doesn’t respond as well with this shape.

Honestly, for a hazer, I personally would use a cuelist. Create two cues, the first for when the hazer should be on and the second for when the hazer should be off. Then just set the follow time on each cue to how long you want it to be on or off. That way it could be on 75% of the time, off 25% of the time. Or 50-50 if desired. Then simply play or release this cuelist to enable or disable the hazer. 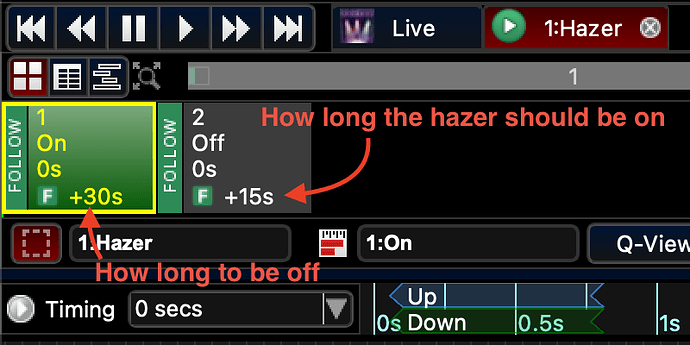 Drew - Thanks so much for the thorough and quick response! That’s a cool way to do it, and fits into the end goal I was working towards.

Probably a silly question, but will those two cues loop if they’re both set to “Follow”? Hopefully they will. For my operators, I’ve shown them to play a specific cuelist on the console to maintain haze, and then to hit the button again for “haze off”, essentially. Thanks again!

So with the way I’ve implemented it above, yes it would loop. I tested it before attaching that image. 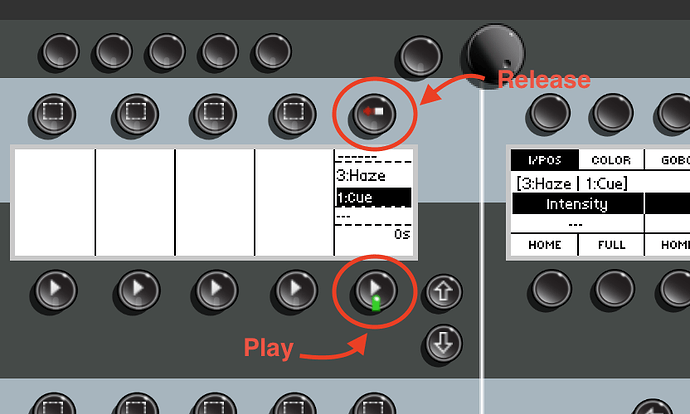 You’ll need to assign those buttons to what you want them to be and potentially label them with some Gaff tape on your console. See page 241 of the Vista 3 R3 User Guide.

When I run shows, I will typically use a fader instead, so that I can just ride the fader based on how the haze is sitting in the room. So if I need more haze I just add it with the fader. However if you use haze consistently and know what works best for your room, then this would be a great approach. But for me I’ve always just needed to run it manually. (What I do is put haze at full in a cuelist, set to auto play/release, set to include all features on the fader instead of just intensity, and then assign it to a playback.)

Thanks so much for this. With our Radiance hazer, it’s so powerful that I had to set the cue to 5% on for 30, off for 30. Both the “on” and “off” cues turn on the haze dispersion fans, so that when the cuelist is released, the fans turn off also and the stage noise is lower. It’s worked so well for us this week!