I’m used to using VDMX to make external events trigger MIDI to my S1/S3. Now with an EX…no MIDI port…what to do?

Have a RME Babyface Pro for my interface if that matters.

In short - i have two audio filters in VDMX - feeds kick and snare from the mixer- then those 2 frequencies are sent as MIDI notes to Vista to trigger flash ques.

How does your RME Babyface connect to the Vista computer. Can it connect by USB with the appropriate drivers installed? If so just enable this device in the midi tab of the user preferences.

Been working on this today(finally) - had to reinstall everything on my laptop so it’s all new…Running V3 w/ a USB512 and have audio coming in to my Babyface presumably triggering MIDI note sends using VDMX for audio filtering (kick=1, snare=2).

V3 actually sees VDMX in user preferences as a midi source but that doesn’t seem to affect anything.

Should add that in the little playback window on the virtual console the Midi icon appears but there’s a red ! on the right side - no clue what that means.

I’ve installed Lockstep per Ben Coleman’s “Midi and LTC in Vista” doc…it sees the audio coming in but can’t seem to translate that into Midi.

OK so now/later I’ve got it working…not using Lockstep but selecting VDMX in the user preferences. Now I’m getting this white timecode window in the middle of my editor display…would like it to go away or be like a dockable window that I could put somewhere 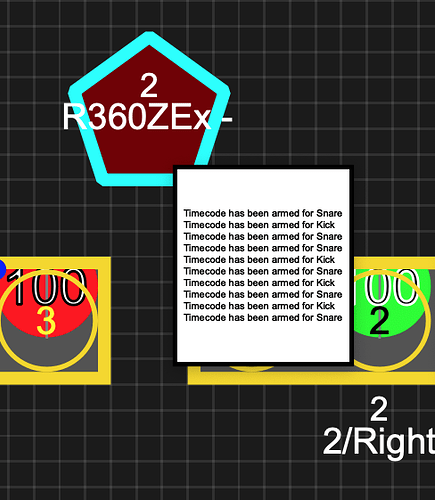 When you say you have audio coming in, is this LTC audio? Lockstep is really only for converting LTC over to MTC.

I am not at all familiar with VDMX and the website doesn’t really tell me what it is and why I would need it in a clear fashion. If VDMX can output Midi and Vista sees it as a Midi input device then you should be able to just go that route. One thing you may have to play with is the note velocity. I have found that when using Midi over network or internally you need to back down the velocity. It is only when running Midi over the DIN connector that you need to take it to max velocity.

I would also kill timecode as an input since you are not technically using it. You can turn off the timecode options in the Cuelist properties and that should stop the popups.

I’m using VDMX to turn audio into MIDI. Basic concept (and they have a tutorial page for it) is you make a filter for a certain frequency then if there’s audio in that frequency above whatever threshold you set it outputs a MIDI note number.

VDMX does way more than this of course but this has been a fun thing to add periodically in a concert.