What’s the plan for hardware for the command line? How are other people making it work? The software keypad isn’t practical and using a keyboard isn’t ideal. Any known plans to release a hardware keypad down the line? Thinking about customizing a gaming keypad for me to program with.

There are no current plans to release a command line wing.

Like you say though, you could create your own custom keyboard/keypad quite easily.

Personally I get on well using a standard QWERTY keyboard, but I have been using it this way for quite some time now.

Another thing that you could potentially consider is to remap some keys on a normal full-sized keyboard (for example the numpad keys).
Google “keytweak” - this is a little bit of software that lets you easily change/remap keyboard keystrokes by altering your registry.

I’ve been learning hardware design recently, I could try making a custom keyboard PCB and software for it, the only issue is that I would need someone else to design the enclosure and keycaps for it all.

I would say get a Elgato Stream Deck and make keys for it. 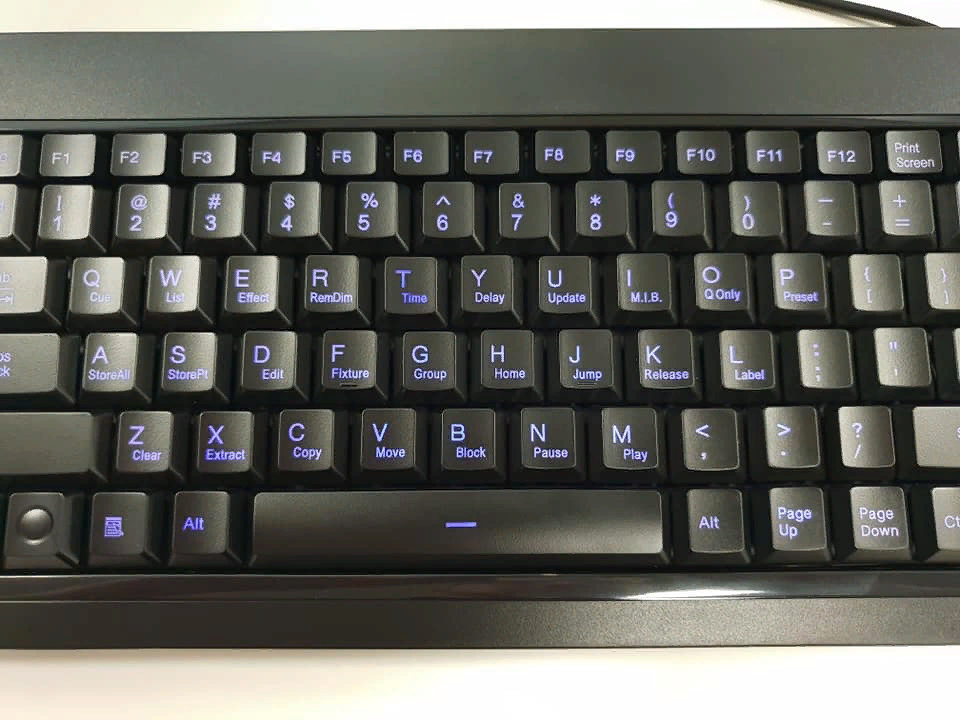 After a good amount of research, the hardware is actually the easy part: gamers have been buying customizable keypads for eons now. The keycaps are the hard part but I’m working on that at the moment.

The Stream Deck doesn’t have near enough buttons. Maybe if you had it as well as the numpad it would work but I’m looking for something approximating the layout of the soft keypad in the software.

Did you label those yourself or have a company make them for you, and if it was a company, who did you use?

I was hoping on making what would essentially be one of those keypads except with a display on it as well for showing what is currently in the Vista console, kind of like what the ETC Ion had to show commands right above it’s keypad.

The picture he showed was the keyboard on the Jands Vista L5.

Thanks for the insight. I actually found a gaming keypad whose keys can be remapped on the hardware controller level, which means I can drag it from computer to computer without needing to reinstall software. It seems like some of the keys on the virtual keypad react differently than their real-life counterparts (i.e. + and - flip to Left and Right when Fn is pushed on the soft keypad, but not on the QWERTY; Out doesn’t change to Home when Fn is pressed [but the reverse is true], I can’t figure out what’s going on with Delete and Escape). Some bug hunting here would make it pretty simple to get parity between the soft keypad and a hardware keypad.

It’d be fairly easy to make a keypad with a 100% custom layout. There’s plenty of open-source firmware out there (see: QMK, TMK) and it’s fairly easy to just write a new one from scratch for any $5 AVR microcontroller with USB support (my current go-to is the ATMega 32u4)

Dur. I have no experience with the L5 other than trade shows.
The keypad display may be difficult unless Vista somehow sends that data as serial data.

I already have some of the code written for scraping command line data out of Vista’s memory on Windows, but I last touched it in Vista 2 and I’d probably have to update it for each version of Vista (unless some kind of plugin API like I suggested back on the old Jands-hosted forums gets implemented)

AUSTRALIA ONLY Anyone interested in one of these? They are the original backlit keyboard from the manufacturing run of L5s. Will work with any computer with USB. $10 each, collection from Jands in...

You could also look into the X-Keys keypads.

I have tested it out and with the ability to make folders and folders in folders forever it isn’t that bad. If you want to I could send you the file to open up in the stream deck software just to see what you think of it.

I am working on a custom console that resembles a vista MV. The console has an intensity encoder, and 4 cuelist faders. The whole console is based off of Arduino Mega and a helper program I wrote in python to handle MIDI show control and CMD line keypresses. This program is packaged into a standard application for both Windows and Mac. The whole console can be built for about 50-60 USD.

Currently the actual faders do not work because of the inability to control cuelist intensity with MSC or the command line. If you read some other threads, there is work being done to add more MSC commands. Once this is added I will update the code and these will have full control. I do not see this as an issue as I use the top most button as a cuelist release button, the middle as a select, and the bottom as a go button. The fader is not used in my shows as using go and release buttons provide a smoother transition.

bsw, do you have this software working with fader control? We are looking to set up a remote control system to our L5 console. I would love to see the project.

Currently there is no “endpoint” that I can access that will allow fader control from outside source. I have not tried the vista linking system where you can link multiple vista instances on the same network. Not sure if you need another license key or if the one in the L5 authenticates all connected instances. @ben.coleman can you answer this question? I would be very happy to see external midi control. This would be very nice as our church has midi control boards for all of our software (Arena and Pro presenter) and lighting is the only thing missing. Even just the ability to have extra control wheels and buttons would be very helpful.