Hi all,
Is there any way to generate some kind of “dynamic Cues” where a group of fixtures ist used and automatically updates if I add or remove a fixture from this group?
So that the cue is not saving like “Color on this 8 fixtures to Blue” but “Color of all fixtures in Group XYZ to Blue”. Than I could easily update the used group and all my cues using this group would be updated automatically.

I have prepared me a busking Showfile but right now I have to update my cuelists cue for cue as soon as I have more fixtures in the Rig.

Do you know any way to realize that? Would make my workflow a lot faster

I think the best way to achieve this is via presets. See page 120 in the Vista 3 User Guide for info on how to create, edit, and update presets.

Now, I’m not sure if presets will update in a cuelist when you add fixtures to them. What I mean by that is that if you add new fixtures to your rig, and update your presets to include them, I don’t know if cuelists that reference those presets will update the new fixtures which had previously not existed. That’s a question that hopefully @jack.moorhouse can answer for you, since he has more in-depth knowledge of how Vista is programmed to behave in scenarios like this.

But I can tell you that generally speaking, the widely accepted way of programming shows is to use presets for almost everything, so that updating your “blue” look is as simple as updating a preset, rather than changing the blue color in every cue. I personally use them primarily for position and beam, so that once I aim a mover I don’t have to re-aim it in any other cues. I typically will then set colors/intensity/gobos individually, but typically that’s worked fine for me since my rig rarely changes. But in most applications, presets are a powerful tool to speed up your workflow.

A Matrix in Vista is actually a dynamic group.

You’d have to create individual matrices for your “dynamic groups” but it would work exactly as you expect. (It’s actually a really efficient way of programming under the hood as Vista only saves one event, per feature, per group and not individual fixture events.) 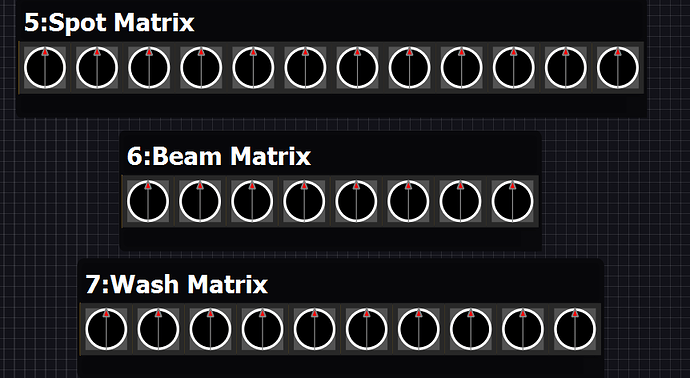 When programming, select the matrix and not the individual fixtures.

Then simply add or remove fixtures from the matrix. All cuelists and programming that have matrix events in them will be automatically updated.
Presets can be applied in the usual ways.

I don’t think this was ever intended as the matrix primary function (first and foremost you could argue it’s Vista’s pixel mapper… but is it a dynamic group = absolutely!).

We do actually have a feature enhancement to improve on this behavior in our database (perhaps not needing to create matrices for the dynamic groups). I have added your +1 to VST-4338

PS - I just noticed that our matrix timeline events are not respecting their matching group labels.
Added as bug VST-4630