I am running Vista V2 on an older I3 console (2010-ish). Since the console is so old we will likely have to replace it soon, so if there are features of V3 that can help with this post please let me know.

We have recently started sending Midi notes from our graphics computer to our I3 console. The problem we had to overcome in doing this is that Vista can only handle one Midi play note per cue list. Our church services are fairly well planned, but it is not uncommon for something to change on Sunday morning. For example, the first Sunday we did this, one of our singers did not sing so they cut her song. We need to be able to add or delete light cues quickly and easily, and potentially even move backward to a previous light cue during worship.

With this goal in mind we came up with the idea of setting up one cue per cue list and assigning a different Midi note to play each cue list. Each cue represents a different step in the worship service (pre-service, songs, preaching, video, etc.). For example, note 11 plays song 1, note 21 plays song 2, note 1 plays pre-service, etc.

To make this work we had to turn HTP off for each of the cue lists. We also set the Play At End option to Restart. Each cue has all of the lights in our worship center programmed into it which allows each cue list to be played independently, with a ‘last one in wins’ type of methodology. It allows us to jump around as needed, skip a cue list if needed, or even go back to the top. We did embed a ‘release all except’ command in the pre-service cue list so that it resets everything for the next service.

Setting this up means that each week all we have to do is program the songs, which are the only cue lists that will have more than one step. We can embed the proper play note in the song slides wherever they need to be. All the other cue lists stay the same, making weekly changes easy to make.

This works well, but there is one major disadvantage. We have several volunteers who run the light console and video computer on Sunday mornings, so we try to make things as simple as possible. To that end, before this changeover we had one big cue list for each service and the volunteers used the playback window to run the cue list and all they had to do was click on play for each step. This left the sliders on the console open, so we assigned groups of lights to them. The net result was that we could play a cue list and if there was ever a need to add more light to a particular area all we had to do was push up the appropriate slider. For example, during the songs we keep the house lights at 10%. If we needed more light in the house, we could push up that slider and the house lights would stay brighter until we brought the slider down. When we brought them down they would return to 10% whether the slider was brought all the way down or not.

Because we have turned off the HTP protocol in our new environment of 1 cue per cue list, these sliders will no longer activate the lights in their group. We have tried a few things to get this to work, including assigning each group to a cue list, but so far nothing has worked like we would like it to. We even tried leaving the HTP protocol enabled on the new cue lists and adding a ‘release all except’ command in each, but the transitions don’t work well in that scenario.

Does anyone have any ideas about how to get around this? The easiest thing would be to have multiple different Midi notes in a single cue list, allowing the video computer to tell the console where to jump to. Vista V2 doesn’t seem to be able to do this and our console is too old to upgrade to V3 (assuming that version can do it).

This is on V3 but should be possible in V2 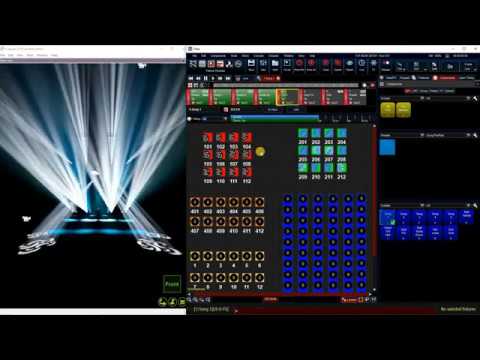 Rob’s video is worth considering. Ideally you should be releasing those cuelists that are no longer contributing to the stage state, but we are only talking about good programming practice here. If every fixture in your venue is programmed in every single cuelist then you wont have any issues playing it back the way you already are. The “last one wins” is called “LTP” (Latest Takes Precedence )

What presentation software are you using? ProPresenter?

A single midi note is a single action and can therefore only “play” a cuelist. It can’t jump to a specific cue. Ideally you would use something like Midi Show control (which does let you specify an exact cue to play) but ProPresenter does not currently support this.

A cuelist per song or section of your event is actually the best practice.

So, for the most part I think you are OK, that leads onto your comment about the group faders.
These absolutely should still function on top of your running cuelists. It’s the group fader action that has the HTP property by default.
The only thing that would stop this from happening is:
A) if you have events in the “live” programmer tab. Is this clear?
B) if your cuelists have a higher cuelist priority than “normal” ?

Feel free to submit your showfile as a support ticket. We will be able to answer this for you really easily.

Have you also looked into Bome Midi Translator? That program will allow you to translate the midi note into midi show control messages which can be used to fire individual cues and cuelists.

All my cuelists have a priority of High - should I try them as Normal? 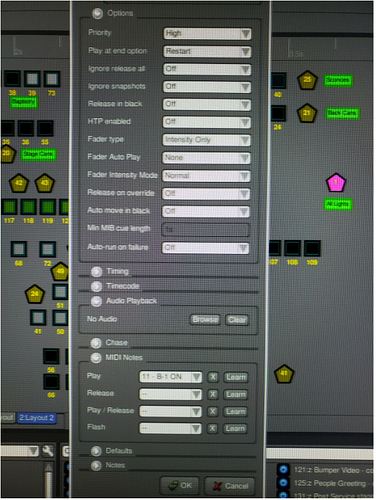 Yes - this will enable your group faders to interact with your lists once again.

What was the reason they were all high? Unknown?

That was the issue, something I should have thought of. At one point we were playing around with priorities when we we were trying figure out what we wanted to do. We ended up not using them but never changed anything back, and obviously should have.

By the way, this has allowed us to have a great amount of freedom in how we are controlling our console. We are using ProPresenter to send Midi notes to Vista. The new version of PP allows a lot of flexibility in setting up displays and timers, so we are able to add ‘blank’ slides that automate those items and send the correct Midi notes to activate a certain light cue. We have HTP disabled and the play at end option set to Restart on every cuelist, and each cuelist only has a single cue in it. With this we are now able to completely run the light console from our video computer, as well as automating some of the other video functions, freeing up one person to monitor what is a new (and not-yet reliable) streaming service.

The cuelist option changes mean that we are able to move forward and backward within any of the cues for the service. Setting the priority back to Normal also means that we can now control/override certain groups of lights with faders if needed. For example if we are showing a video and the lights are down low, we can immediately add house lights if there is a problem.

Thank you for all your help!

To do this, I connected two mac computers with a network cable, creating a midi connection. on one computer I used q lab using MSC SEND CUE MIDI on the other computer I used Jands Vista. With this system you can send any cue belonging to any qlist