M1 does not work!

In version 3, M1 does not work, although in version 2 everything works on the same computer. The third version asks to update the firmware M1, hold down the red and yellow buttons when turned on, but nothing happens. 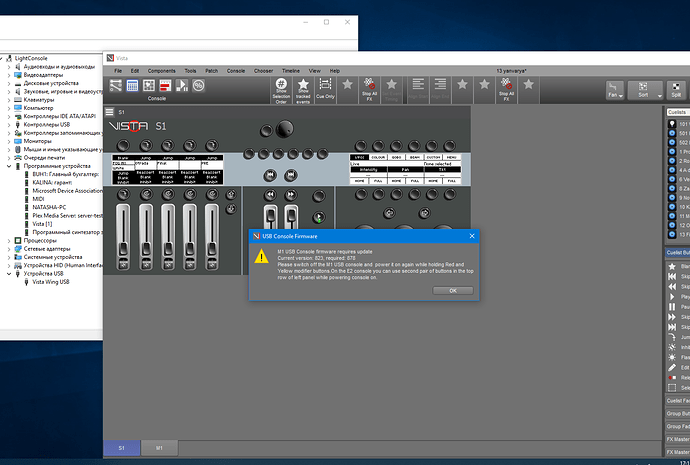 This is a benign message and has since been removed. The M1 gets its firmware automatically each time it is connected.

Try creating a new Vista 3 show first and see if the M1 connects properly. If it does then use Merge to bring over you show data from the old show.

We have also potentially fixed the underlying issue and it is in testing. If you can send your old show file over that would help confirm that this will not be an issue in the future.

We have/had the same issue.

I had to start a new show and migrate everything over manually doing one thing at a time until it worked. I still have the m1 fail and need to hard shutdown.

Can’t wait for the update!

Hey, I’m new to this forum. My M1 isn’t being detected by Vista3. I’ve tried opening a new show on Vista3 but still isn’t able to detect it. I’ve tried removing the M1 console on the OS and putting a new M1 console in its place, but that hasn’t worked either. I’ve also tried running Vista3 as Administrator and have pressed the “Rescan for USB Devices” but nothing has worked so far.

Have you tried changing the USB cable and/or port?

Send a email over to vistasupport@chroma-q.com with your system details if you are still having issues.

Yes, I did try switching out cables to see if that worked. I wish that was the issue. And okay, I will send out an email to them shortly. Thanks!