How do i pixel map?

hello, for a theater performance i’m looking to pixelmap 12: 5x5 matrix panels.
I used vista a lot for regular shows with regular dimmers and moving-lights (almost always using presets and never fx) but pixelmapping is new for me, is there a manual somewhere?

I had a look to the matrix with a video effect and the first question pops up: what video/image format is accepted by vista?

do i have to make every step of this effect in a que list or is there an easier way?
i would like to make some of these effects above but it would be a bummer to change all the lights from all the 12 matrix panels per que per effect, is there a way to copy it somehow over to other fixtures?

sorry for the noob questions…

Animated gifs are the currently only supported video files.

If you are interested, I have uploaded some simple ones here

There are also a few online sites where you can create/download your own. A quick Google search will help here.

If you want to do an intensity roll though:
Click the matrix
New FX
Intensity Wave
press the sequence tab
Select horizontal sweep ( you may wish to reduce the overlap a little)
You can then adjust the rotation of you want to get a diagonal sweep for instance. 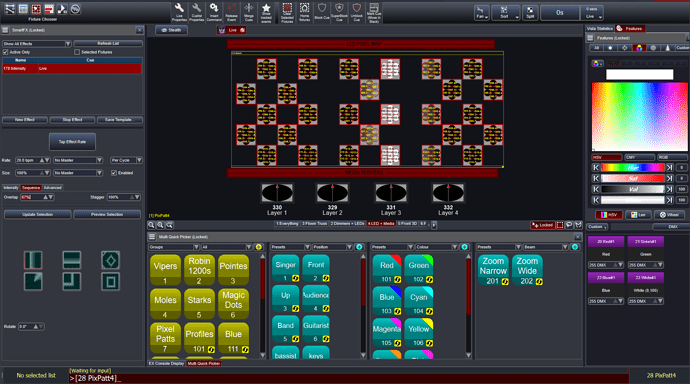 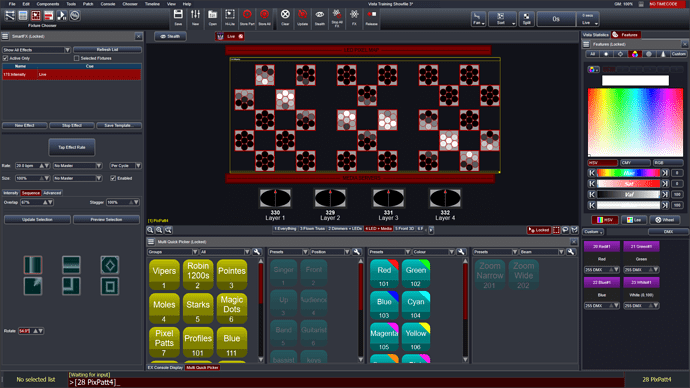 thanks for the reply, it helped allot but the problem is more in making an effect what’s not really standard from one side to the other, i have pixels in order to show a wave instead of making a wave effect, and i want them to move from left to right or what ever. An other example is a landing and departing space ship.

but the solution lays in the swing intensity, i made presets of the pixel map in one fixture, added those in the steps of the swing fx and the effect goes trough all the presets. I can also use this effect on other fixtures without the need to pixel map them all. 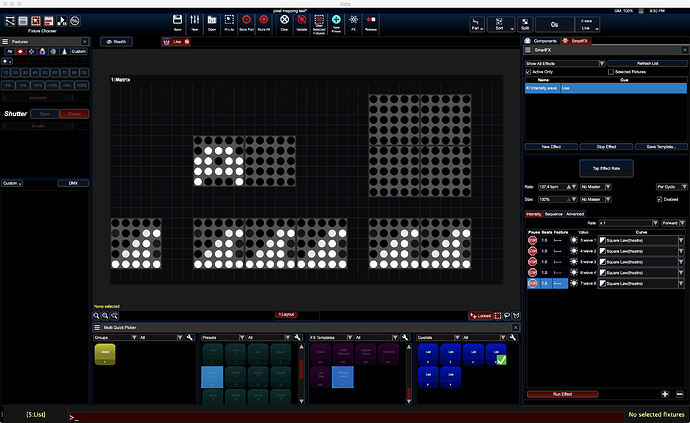 The next problem is maybe more for another topic but still:
The down side of this is that if i go bigger then 1 fixture ( 5x5 pixels) vista doesn’t really know anymore how the presets need to work with each other so if i recall a preset saved from multiple fixtures it does not work
see screen shot: saved preset on the left, recalled on the right

what am i doing wrong?

I would suggest you have an issue with selection order/global.

Feel free to upload your showfile.